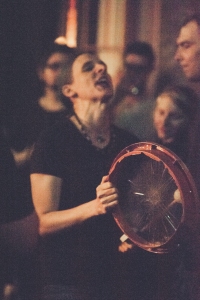 The Ripening The Very Verge of Remembrance / They Must Sleep, Or They Will Devour Us
Some guest vocals on this contagious avant-metal project

Little Songs of the Mutilated They were lifelessly melding in a pool painted with little songs of the Mutilated
A musical version of the surrealist exquisite corpse game. This iteration also featured A Demon Sheen, Gelareh Pour, David Prescott-Steed, Jen Tait and Akoustik Timbre Frekuency.

EX/IN (responses to Dan O’Connor’s IN/EX)
I curated this composition to celebrate the two year anniversary of Dan’s important release. As a thank you to him and everything he has contributed to the Perth exploratory music community and a celebration of Tone List.

Dan O’Connor & Sage Pbbbt lines to
Dan is one of my favourite people to improvise with and while our practices are quite different, we’re both really interested in exploring the possibilities of timbre on our respective instruments (trumpet / voice). Recorded just before I left Perth.

James Bradbury’s Biomimicry
I feature (along with Dan O’Connor) on Mr Bradbury’s release singing in duet with his wonderful “autonomous musical system”. Like singing with a mutant, cyborg version of myself.